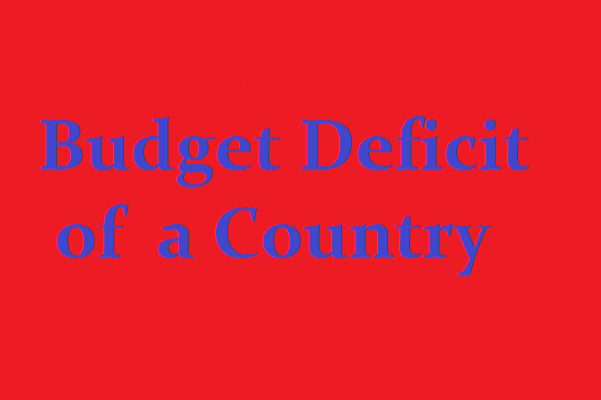 Mostly, the budget deficit occurs when developmental purposes need the expenditure despite the low revenue collection.  There have been many occasions when a developing country like India has resorted to measure of deficit financing to develop new infrastructure crucial for the economy. In most of the cases the expenditure was funded by other countries ally to India.

There could be many ways to gauge the deficit in a country’s economy, the budget deficit is one of them.  You can segment the various kinds of deficit  under few important ones as below:

1. Budget Deficit of a Country-When Total Expenditure is More than Total Receipts

This is a type of deficit, economy of most of the countries uses the formula more frequently to gauge the status of their financial condition. Mathematically, Budget Deficit of a country = Total Expenditure – Total Receipts. The budget deficit occurs when the expenses is higher than the revenue collection. When the countries and business experiences budget deficit they borrow some money to avoid the bankruptcy. Investor and Analyst consider budget deficit as the overall health of a business, local government and country. Countries can counter the budget deficit either by cutting down the expenditures or enhancing the revenue generating operation or by employing both.

In simple terms, when the government or business decided to spend more revenue than the collection of the revenue, then there will occur the situation of budget deficit. Suppose the businessman has decided to spend 400 million rupees on the infrastructure, but has only 350 million rupees it means they had planned for budget deficit of 50 million rupees. The businessman would cover the deficit by borrowing loan from the bank or sale some bond. They are assured that they would get profit in future.

The factors that drive the government budget deficit are the high unemployment rates, Higher Governmental spending and slower economic growth than the trading partners. Moreover, due to uncertain events and policies can take the situation of budget deficit. For example, after the 11 September, 2001 attack, U.S. spent millions of dollars during the presidential tenure of George W. Bush in defense activities that led to the budget deficit. Even, also the business experience budget deficit because of the following factors- Capital expenditures due to quarter losses, Economic Crises, Higher operating Cost, and Expansion and Business opportunities.

2. When Revenue Expenditure is More than the Revenue Receipts, the Case is of Revenue Deficit. It is One of the kinds of Budget Deficit

In short, when an employer thought of 40,000 bucks in his account but could get only 38,000 bucks. Hence, here the salary is short of 2,000 bucks. It means there is deficit in the revenue of the employer. Revenue deficit occurs in business, daily wages employer or governments because the actual sales or collection may differ from the expected values.

3. When Total Expenditure is greater than the Total Receipts Except borrowing, then You Can Call It as Fiscal Deficit.

So, in mathematical terms, it is represent as: Fiscal Deficit = Total Expenditure – Total receipts except borrowing. Here, Fiscal deficit is the economic situation in which the government’s expenditures exceed the revenue it generates, excluding money from borrowing. This kind of deficit sounds like budget deficit of a country but there are fundamental differences. The standard operation of generating revenue are taxes, tariffs, selling resources etc.  A government has to spend on consolidated funds, schemes, contingency expenditures like disaster and compensation etc.

A government generates its revenue from the interests we receive from the given loans, tariffs, taxes, fines etc. are Non-Debt creating revenues because the government would not have to pay back to anyone. So, we do not include the loans we borrow during the calculations of Fiscal Deficit.

4. When Fiscal Deficit is More than the Interest Payments of the Previous Year, This will be the Case of Primary Deficit.

Here is one more related worth read.