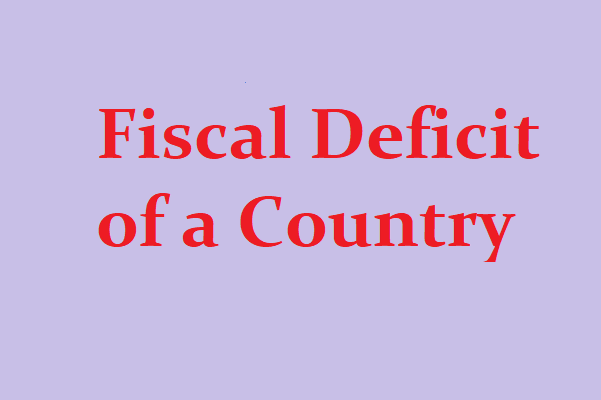 Thus, in mathematical terms, Fiscal Deficit of a country = Total Expenditures – Revenue receipts, excluding borrowing money. It is a more comprehensive measure of budgetary crises or imbalances. Thus, you can see that when the government expenditures (both revenue and capital expenditure) exceeds over the receipts of taxes and non-debt capital resources, the fiscal deficit occurs.

This Fiscal Deficit of a Country can be Financed Through the Following Ways:

(i) Government of a country would borrow money from the internal and external market to finance the fiscal deficit. The government has to pay the interest annually on the borrowing money. Later, the government would pay the debt of money that had been taken earlier.

Causes of Fiscal Deficit of a Country:

(i) Increased of Subsidies by the Central government–     The government gives subsidies on certain commodities such as fertilizers, food items, exports etc. Thus, the fiscal imbalances occur as the government increases its expenditure on subsidies in huge amount. So, it led to the Fiscal Deficit of a country.

(ii) Interest Payments-      The government has the burden of interest payments of the previous loans of the external and internal market. This one is the major factor for fiscal Imbalances. It considerably increased the expenditure of the government. Thus, led to the Fiscal Deficit.

(iii) Defence Expenditure–     A government needs huge amount to strengthen their defence and security across borders. So, the countries spent billions to buy technology and ammunition for their defence personnel. Thus, it made the government spend money at higher amounts for their defence. It is one of the causes of the Fiscal deficit of a country.

(iv) Excessive Government Borrowing–   When a government had borrowed high amounts from the internal and external market for beneficial of the country, the fiscal imbalance may occur over the next government tenure. The government would have to pay high-interest payments of the debt.

(v) Tax Evasion–    Tax evasion is the number of unreported incomes. It is the difference between the actual income of the individual and the income had reported to the official. Tax evasion is the illegal evasion of taxes by individuals, corporations and trusts. The taxpayers misrepresent the income or affairs to the tax authorities to reduce the liability of tax payments. Thus, the collection of revenue decreased considerably and leads to fiscal imbalance. Even, the corruption is widespread at all levels and it is one of the factors of fiscal imbalance.

The fiscal deficit has an adverse effect on the growth of an economy. It increases the debt burden, reduces the expenditure of a government on the infrastructure. Thus, led to slow growth of the economy of a country.

The fiscal deficit has two phases: one is the positive impact and the other one is a negative impact

In the case of recession, when the unemployment increases and low income, the government spends more money over the revenue receipts to revive the economy. Hence, Fiscal deficit seems very effective at the time of recession. Well, a recession occurs when the production surplus but there is scarcity in demand. Usually, the market reduces the scarcity of the demand itself by curtailing the prices of the goods and services. But, when the scarcity of demand over the production is at a higher extent and market could not able to correct drop in demand, then recession takes its position in the economy.

During the recession individuals would have not enough money to buy, as a result, the production would be stagnant. Hence, the companies lay off the employees. Due to which the Unemployment increases and GDP growth curtailed. So, in this case, government expenditure exceeds the revenue receipts for the betterment of the economy of a country.

(ii) Fiscal Imbalances lead to inflation in the economy- It causes inflation in the economy of a country. It is a case when the prices of general goods and services go up. Due to the increase in the general prices of goods and services, the value of the money decrease or the purchasing power of the money reduce. It means, after inflation, the same amount of money would buy fewer goods.