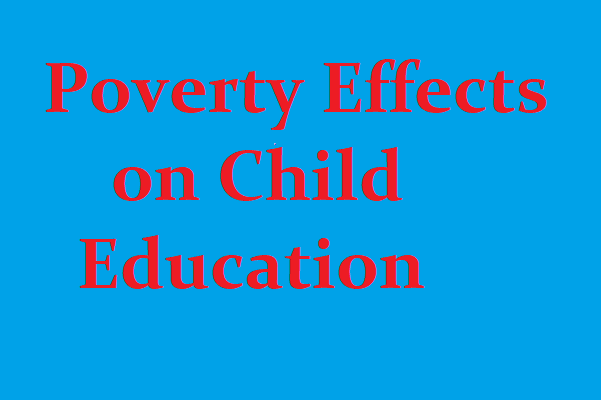 Poverty effects on child education and their physical and mental health. It not only affects child’s education but also to the family financial economy. Education is the weapon with which we can defeat any type of suppression in the world. India is suffering from the two major issue that is unemployment and poor literacy rate in various place. These two issues are interrelated with each other. These are major problems to our country. this was also written by our former president Missile man A.P.J. Abdul kalam in his wings of fire

According to the recent studies we are aware of the decline of the educational standards in India. Even, the poor is unable to get the chance to grab the opportunity of that declined standards because of their poverty. Even, if the BPL parents wanted to send their girl child to school, the woman child abuse hold their hands to send their children. Due to this factor the no. of girls child are not dare to go to school. In our constitution RTE (Right To Education) is right for all human and the parents are free to give the  education to their children all the right.

By the education only you will get rid of your poverty and enjoy a great life.

Poverty negatively affect the children access to education. Lack of financial resources keep the poor away from education. Poor staying in isolated places sometime find it difficult to pay the transportation charges. Government across the world are coming out with program such as cash transfer, food security etc. to motivate poor to send their children to schools. Government of India is reaching out to 12 Crore students in schools with its mid-day meal program. Program address the issue of food security that is main cause of low enrollment in schools among poor. Though the Incidence of mid-day meals poisoning in recent pasts have compelled even its beneficiaries to boycott the schemes. The food quality of the schemes has became worse, so they find more appropriate to work than go to school.

Poor families are unable to afford the proper nutrition or even they do not have enough food at home to fill the stomach of their children. Due to low income or poor earning, they are unable to send their kids in the school for basic studies. Even, poor families send their children school without breakfast or lunch. Not eating enough food has adverse effect on the children. It reduces the learning capacity of the brain, so as to poor students could not secure enough marks and fall back to their classmates.

Children who witness violence or experience household stress, has limit their learning process due to inability to cope with the situation. These conditions are much more likely to occur in low-income families.

Those students belong to the impoverished households have generally low verbal and reasoning skills than the rich peers. The lower level of verbal and reasoning skills in impoverished students is because of low focus on the education of their parents. With longer working hours, lower levels of education, and fewer literary resources, poor parents are unable to give their kids the same level of attention and thus their children learn a much more limited vocabulary. A study done in 1995 found that poor children had heard 32 million fewer words than other students starting school. Moreover, poor children are generally unaware about how to deal with the problem and to find solutions before entering into the school.

Poverty is directly linked to poor sanitation & nutrition. Nutrition intake & poor sanitation critically impact the children’s health & mental capacities. Lower level of nutrition causes low energy and poor attention among the poor children that translates in to poor performance in the schools. While the poor sanitation leads to frequent illness that keeps the poor children away from school most of the education year. Poverty if not addressed at the right time with proper care & nutrition may push the children in to a condition where no education can help them to break the vicious cycle of poverty. Government of India has implemented Integrated child development schemes to improve the health and nutritional level of mother & children below 6 years of age to break this cycle.

4. Education Environment has Vibrant Affects on the Child Education

Even when Poor children get access to school, they don’t get access to resources & atmosphere needed for education. They don’t get access to books, laptops, uniforms, electricity etc. Poor children often need to support their parent in household work and other activities. Burden of these responsibilities sometimes leave very less time for students to focus on school related tasks. Skepticism about the role of education among poor parents at times leads to create an unsupportive environment for education at home. Poor Kids performance starts lagging behind other students that ultimately convince parents to drop out their children from school.

4. Difference of Education Quality in Urban and Rural Areas

Poor children access to quality education is still a distant dream. For ex: Majority of the Indian poor live in rural areas of the country that leaves the poor to rely on poorly run private school or government schools to meet their education needs. Private schools in rural area lack in physical infrastructure such as drinking water facilities, toilets, labs, play grounds etc. and quality of teachers remain dismal. OECD survey ranked the quality the quality of education of India 72 out of 73 countries. Government schools in rural areas suffer from teacher-absenteeism and poor teacher –student ratio. Nearly 50 % of the primary schools in India have one or two teachers that means poor children fail to get the sufficient attention in the class room. Poor parents’ inability to push the school management to function effectively leave the children education at the mercy of school administration.

After overcoming all the hurdles, when they accustomed themselves to school they face the biggest hurdle of their life, discrimination. For ex: RTE has put 25% quota for the poor kids but here also they could not access to this. Poverty in India has its caste and religion that has made even the small children vulnerable to discrimination. Despite, the schools is the safest place.

Teachers don’t acknowledge poor children presence or ask them to sit on last benches. Poor children are not given any homework or special attention which they need due to their inherent disadvantage. Private institution is reluctant to accommodate the poor with elite class. Poor student are discriminated not only by their teachers/school administration but fellow students coming from elite class.

6. Poverty Effects on Child Education and on Their Mental and Physical Health

Poverty absorbs lot of energy of its victims. Daily struggle & anxiety accompanied by poverty leave very little energy for children to focus on education. Most importantly, Poor quality of basic education back them so much behind. So, even they find it difficult to compete with the average middle-class students at later point of time. Rude and insensitive attitude of teacher and bullying nature of fellow students make them suffer mentally & force them to opt out of school in initial years itself. Absence of support in higher education limits the benefits (if any) of education in their life. Some of the poor family child are succeed and achieve the milestone . Otherwise, our education system make little impact on millions of children coming from poor families.

7.  Poverty Effects on Child Education and Lack of Education Leads to Faulty Practices

India is a country with more than 60% people living in rural areas and with poverty estimate of 37.5% (2009-10). Due to this culture of poverty it is difficult for the rural population to spend on Child’s Education. Due to lack of education various faulty practices develop like Child Labour, foetus killing, gender inequality etc. These all faulty practices leads to minimize the education of child.

Several countries have come up with scheme of providing free/subsidized education, free books & uniforms etc. to improve the enrollment ration among poor. For ex: Government of India has enacted Right to education act to provide free & compulsory education to all the children in six to fourteen years. RTE 2009, is expected to impact positively the attainment of education among poor. Government has continuously tried to address these issues through its plans and legislations. However, there exists certain lacunaes like faulty implementation procedures, improper planning, un-identification of beneficiaries.

Although there exist legislations, plans and schemes, but could not address properly. Since the schemes or plans not being address properly, so these makes the poverty effects on child education colossal. Only the need of the hour is to follow these to better address this issue. Which play a significant role in the foundation of the countries. Child Education is an important tool to correct the social problems of India as “Children are the future of nation”.