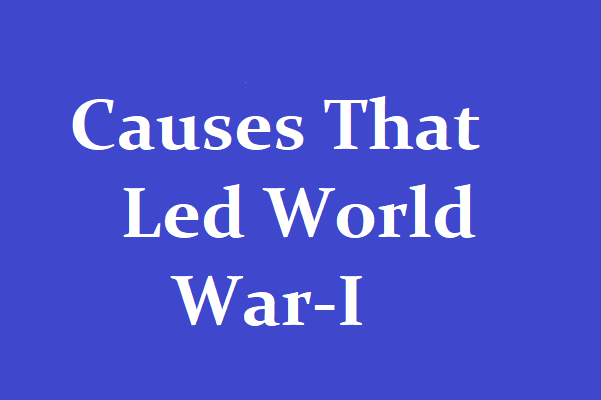 There are many major events that led the World War-I. First World War is one of the drastic moments that changes the political, geographical status quo of the world. World War-I has happened between the Triple Alliance and Triple Entente. It was the global war originating in Europe from 28th July 1914 and end on 11th November 1918. Moreover, this was the deadliest war in the history that causes the death of millions of combatants and civilian of the countries. It makes one of the largest wars in the world’s history between the two major coalitions of the Great Powers. First World War is known as “the war to end all wars”, it led to the mobilization of more than 70 million military personnel.

Gavrilo Princip, a Bosnian Serb Yugoslav nationalist, assassinated the Austro-Hungarian heir Archduke Franz Ferdinand in Sarajevo. Nationalist organization in Serbia supported the Gavrilo Princip. The assassination led the event of 23rd July Crisis. This July crisis was the interrelated diplomatic and military escalations among the major powers of Europe in the summer of 1914. It became the major cause of the World-I. It triggered the many events resulting in the declaration of war against Serbia. Contemporaneously, Austria-Hungary and Serbia declaring war on each other, led to the beginning of World War-I.

Imperialism is one of the important causes that led to the First World War. Because imperialism means countries increased their power and wealth by expanding their territories and dominating over the other country. Most importantly, Imperial rivalry, imperial security and expansion of empire are the important factors for the origins of the First World War. Mostly European countries were in perpetuity to expand their territories by controlling or dominating over the other country. Imperial rivalries between France, Russia, Britain, Germany played an important part in the creation of the Triple Entente and Isolation of Germany.

Germany diplomatic isolation policy termed as “Weltpolitik” was the consequence of the isolation of Germany. The aim of Weltpolitik was supposed to transform Germany into the Global powers. This can be done by the acquisition of overseas colonies, assertive diplomacy and the development of the large Navy. It was believed that assertive diplomacy made the isolation of Germany. Even, it helped in cementing the Triple Entente.

Countries were run in high tension because they did not want to lose the tighten over the dominate regions. Moreover, this expansion of empires pushed the world into a great battle. This desire to expand the empires led the World War-I.

Militarism was an important force in several European countries before the World War-I. In Militarism, military personnel and ideas are incorporated into civilian government. It was also believed that military power is an important attribute for nation strength. Generals and admirals of the military acted as the ministers and advisors. They completely influenced domestic policies. Even, they demanded the increment in the defence expenditure. This trend led to an arms race, which gives rise to new technologies.

Before the world war-1, Britain had the most powerful Navy in the world. But Germany had a smaller navy than Britain. So, Keiser Wilhelm intensified his intention to make a bigger Navy than Britain. This threatened the British empires. Despite, Germany had not a big empire as Britain had, but it was believed that Germany was best trained and most powerful country. All the major European countries started to build their Navies stronger. As great powers of European mainland made their Navy stronger, they started to made alliances with the neighbouring countries.

Militarism did not start the world war-I, but it created an environment where war could occur. Militaries were very important in terms of national and imperial strength during the 19th and 20th century. A powerful nation needed a large military, armies, navies to protect the homeland and imperial regions and trade over abroad. At that time major inventions and reformation in the technologies and artillery. There were great changes in the quality and quantity of weapons and equipment. They did effective improvement in the range, standard size, accuracy, and calibre of the technologies and Weaponry.

Short-Term Causes of the World War-I

This was the immediate causes that led the world war-I. So, the assassination of Archduke Franz Ferdinand was the critical event that created the path for the war. It was not only bad for the Ferdinand family, but for all Europe. Ferdinand was the throne of the Austria-Hungary. He and his wife Sophie were on the way to inspect the army in Sarajevo. Seven Bosnian Serbs had planned to kill the Ferdinand on the way. One of the conspirators tried to kill him by throwing a bomb on the car, unfortunately, he and his wife escaped unhurt. So, they decided to return back to their home. When they were going back, one of the conspirators Gavrilo Princip shot them dead.

This then led to the cold-blooded First World War. Austria blamed Serbia for the killing Archduke Franz Ferdinand. And, then Austria-Hungary declared war on Serbia. Russia involved in the war to defend Serbia. After that, Germany sends an intimation to withdraw his hand over Serbia but Russia did not listen. In response to that, Germany declared war on Russia too. Since Russia and France were in the treaty so, France put itself into the battle. This was the cause that led World War-I