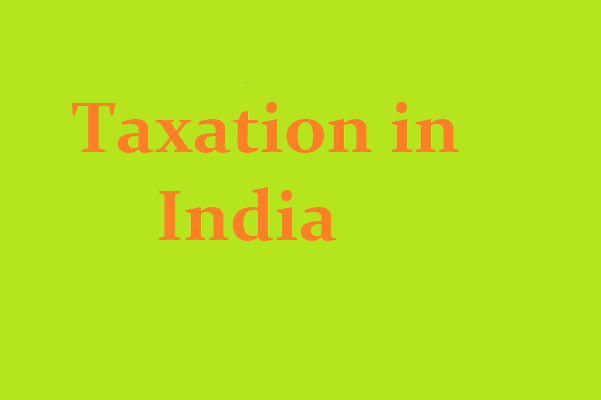 Introduction of Taxation in India

Taxation in India or in other countries play a key role in the development of the countries. So, Tax is a compulsory financial charge or charge imposed on the taxable income of taxpayers (an individual and other legal entity). The Government organization imposes it on eligible taxpayers so that government can fund in the various public expenditures. A failure to pay the tax, along with evasion of taxation or resistance to pay the tax, is punishable by law.

Taxes are collected in place to use in the direction of development of the countries, governments functions, pay for the public needs. General taxation on the taxpayers based on the annual income amounts, and some levy the rate of taxation on the personal annual income. Countries or sub-units often also impose wealth taxes, property taxes, sales taxes, value-added taxes, payroll taxes or tariffs. Because, Governments use these taxes to fund welfare and public services. So, these services can include infrastructure of the country, education systems, pensions for the elderly, unemployment benefits, and public transportation. And, Energy, water and waste management systems are also common public utilities. A government’s ability to raise taxes is called its fiscal capacity.

Taxes in India are levied by the central government and state government. The constitution of India allocates the power to central government and state government to levy various taxes. The local authorities such as the Municipality can also levy certain minor taxes. And as we know, India has abolished various taxes with the course of time and put into order as per the requirements. Some of them are Inheritance Tax, Gift Tax, Interest Tax, Wealth Tax etc.

History of tax in India

Kings used to impose taxes even on the grass lands used for grazing animals. And Charah was one of the Tax which was also introduced by the Allauddin Khilji.

Kharaz was tax levied on gross production of lands belonged to Non-Muslim. It was introduced by Firoz shah Tughlaq.

Ushraf was tax levied on gross production of lands belonged to Muslim.

This was kept in the special treasury of Diwan-i-Rasalat headed by Dabir-i-Mulk. Because, Zakat was the religious tax levied on Muslims.

It is a per capita yearly tax historically levied on the Non-Muslim, called as Dhimma, permanently residing in Muslim lands governed by Islamic law. It was an important tax because, it acts only on adult, free, sane males while exempting the women, elders, children, handicapped, the ill, the insane, monks, hermits, slaves.

Firuz Tughlaq introduced the Sharab or Shart Tax. And, it was 1/10 of the production of the crop. The king levied tax on farmers to develop and maintain the supply of water.

In the Vijayanagar Empire, the Government department responsible for collecting the land revenue is called as Athanave. The Vijaya-nagara emperors collected the taxes based on the soil fertility of lands. And, It is the tax on production. So, Tax on production is 1/6 of the gross production. It was paid either in the form of crop or Money. Heavy taxes were levied on prostitution.

Murshid Quli Khan introduced the Zarib tax. It was collected as ¼ of the crop production. Farmers paid this tax in any form.

After the Lahore session of the India National Congress on 26th December 1929 where Purna Swaraj was declared, they also referred to the horrendous salt tax on India public. Moreover, they found a way to resolved and abolished the oppressive salt tax. So that, Gandhi ji apprised the Lord Irwin about the prevailing social, economic, and political conditions in the country.

On 12 March 1930, Mahatma Gandhi embarked on a Satyagraha with 79 followers from Sabarmati Ashram to Dandi on the Arabian Sea coast. So, this march was popular as the name of  Dandi March. This march was sensationalized by the International press. Mahatma Gandhi Images and the video clippings were passed on the distant corners of the world. Gandhi reached Dandi on 6 April 1930. After his morning bhajan, he took handful of salt and declared the end of British Empire. The police arrived and arrested thousands of national leaders including Gandhi. Gandhi’s bold defiance of the salt law encouraged other Indians to break the law as well.

Gandhiji intended to lead Dharasana Salt Works in Gujarata after the Dandi march, but was arrested by the police. So, the responsibility fell upon the Sarojini Naidu to lead the Satyagraha at Dharasana. The proceeded the satyagraha to the Dharasana, but on there police stopped them. The non-violent satyagrahis proceed to confront the police but the police declared the Lathis Charge and beaten down. Later, the reports of the American journalist Webb Miller turn the opinion of the world against the British Colonial rule in India. Webb miller was the witness of the Gruesome scene at Dharasana, there he counted the 320 injured bodies.

In April 1930, Congress leader Chakravarti Rajagopalachari led a salt satyagraha in Vedaranyam, Madras province. The satyagrahis reached Vedaranyam on the east coast of India on 28 April, where they prepared salt illegally on 30 April. The stringent salt tax was imposed on India. So, Indian public vehemently condemned the salt tax.

Salt Tax before the British Empire

Salt tax prevailed since the earliest time. It was introduced in India at the time Mauryas. Even, it was prevalent during the time of Chandragupta Maurya. The Arthashastra, which describes the different duties of the people, covers a point that a special officer called lavananadhyaksa was appointed to collect salt tax. The organization also levied the tax on imported salt. However, they accounted for 25 percent of the total value of the salt.

In Bengal, there was a salt tax in vogue during the era of the Mughal Empire, which was 5% for Hindus and 2.5% for Muslims. But, when the British East India Company began to establish its rule over the provinces of India, it affected greatly.

This tax was tribute to the king. And, Raja Som Shah of Ramnagar state started the tax of Chauth. The tax tributes to the Maratha Empire kings in India. Chauth was an annual tax levied at 25% on revenue or production. The Sardeshmukhi was an additional 10% levy on top of the chauth. The historian Jadunath Sarkar has argued that the chauth was essentially a tax paid by those states that did not want the Marathas to enter into their realm. The chauth thus served as protection money against Maratha invasions against the chauth paying state.

Overview of Taxation in India

Assortment of Tax structure in India

(a) Direct Tax– Taxes levied on the taxable income earned from the individual or property (i.e. real and personal property, livestock, crops, wages etc.), corporate entities, and the taxes are paid by the assesses themselves.

Income Tax- It is a tax imposed on the individuals or entities (taxpayers) that varies with respect to the Individual income or profits (taxable income).  It means individual earning more money would have to pay more tax as compared to the less earning individual.

(b)Indirect tax– Taxes levied on the sale and provision of goods and services respectively and the responsibility to pay taxes are on the sellers instead of the assesses directly. In short, tax imposed upon the transaction is indirect taxes.

Major reforms of Taxation in India

GST is one of the biggest Indirect reforms in India. It is a comprehensive indirect tax levied on manufacture, sale and consumption of goods as well as services at the national level. So, GST has replaced all indirect taxes levied on goods and services by the Central and State Governments.

India has adopted the dual GST model in which both the Centre and States levy taxes and it came into existence from the 1st April, 2017.

Taxation in India are levied by the Central Government and State government. Some minor and certain taxes are also levied by the local authorities such as Municipality and Local governments.

The wealth tax act was an act that imposed wealth tax on net wealth owned by an Individual before 31st march of every year. And, this tax act was an act of the parliament of India that levied wealth tax on an Individual and Hindu Undivided Family or Company. It is applicable to all states of India, including the states of Jammu and Kashmir and Union Territories. The government of India repealed this act after 1st April 2016.

According to Gift Tax Act, any individual received gift in the form of cash, draft, check or others that is more than Rs. 50,000/ in a year would be taxable.

Gift Tax Act, 1958 was enacted to impose tax on the act of giving or receiving gifts under certain condition. It came into existence in 1958. However, from 1 October 1998, Gift Tax was ceased to exist. But, in 2004, the government organization renewed the Gift Tax Act again.

It is one of the most important elements of legislation act of taxation India. Because, the Income Tax Act is the charging law of the Income Tax in India. It is essential for the levy, Administration, collection and recovery of Income Tax. Government of India took an initiative to bring the statute draft “Direct Taxes Code” intended to replace the Income tax Act, 1961 and Wealth Tax Act, 1957. But, on later the bill gets repeal.

This act aim is to curb the defaulters of Black Money, or Undisclosed foreign assets and Income and imposes tax and penalty on such scheme. So, it is one of the most important legislation act of taxation in India of the  It is an act of parliament of India. This act came into effect from 1st July 2015. According to this law, the government gives a time frame within which he/she has to undisclosed the assets. So, if the resident holding the assets does not disclosed within the time frame then he/she has to the prosecution.  The goal of this law is to bring back the black money or assets held abroad.

The Interest Act, 1974 was an act that imposed a special tax on the benefits of sum of money in situations specified under its various conditions. It was applicable to all states and Union Territories. This act is no longer exist after 31st March 2000.

This law implies that any charges incurred by the Individual and in the event that these charges are subject of chargeable expenditure. It is an act of Parliament of India. So, it is applicable in all the states and Union Territories except Jammu and Kashmir.

The Finance Act is an important act in India. So, it includes all the government policies. Even, it pertains the existing policies, new policies and changes made to existing policies. It played a very significant role in legislation act of taxation in India. Through this act, the Central Government makes effective to the financial proposals at the beginning of every financial year. Even, there are various important elements in the Finance Act that give effect to every Financial Year proposals. The Income Tax Rates rule is one of the important element.

The Finance Act is responsible for laying down the tax slabs that applies to taxpayers. The Act includes various details related to :

GAAR was originally proposed in the Direct Tax Code 2009 and was targeted at arrangements or transactions made specifically to avoid taxes. So, General anti-avoidance rule (GAAR) is an anti-tax avoidance law under Chapter X-A of the Income Tax Act, 1961 of India. Department of Revenue framed the Income Tax Act under the Ministry of Finance.