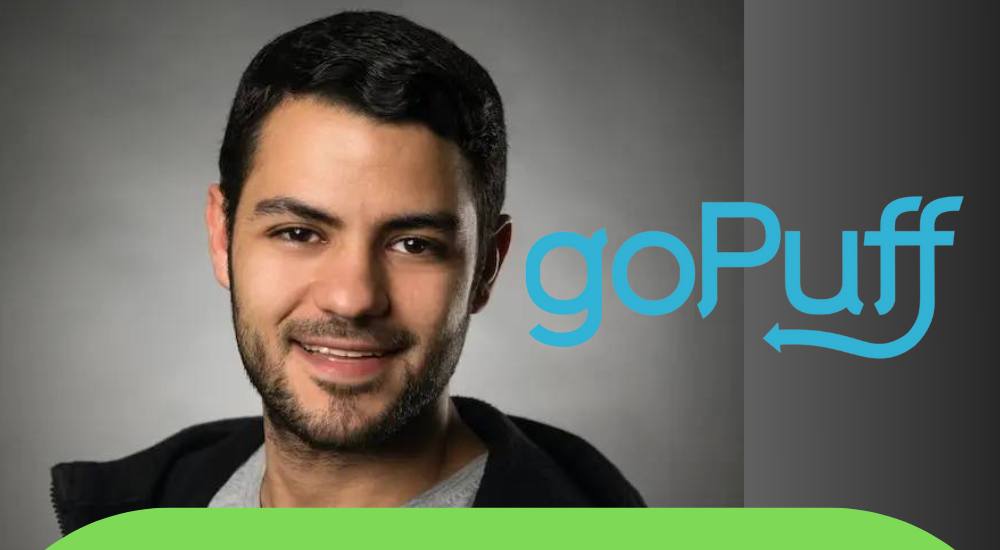 Yakir Gola is the co-founder and co-CEO of Gopuff, a go-to platform for immediate delivery of consumers’ everyday needs, which quickly delivers orders of cleaning & home products, food & drinks, groceries, alcohol, and even over-the-counter medications. The company delivers thousands of items in around 30 minutes, reaching 1,000+ cities worldwide with more than 600 outlets and over 12,000 products. As of October 2021, Gopuff operates in over 650 US cities through approximately 500 micro fulfillment centers.

Yakir is a first-generation American (people born outside of the United States to parents, neither of whom was a U.S. citizen) who grew up in an entrepreneurial family , and his parents are from Israel. Yakir said in an interview about his earlier life that his father immigrated from Israel 40 years ago. He also mentioned belonging to a low-income family; he learned much about running a small business from his father, like how to make profits, negotiate and build relationships.” In 2012, Yakir was a student at Drexel University, where he met co-founder Rafael Ilishayev on the first day of their Business 101 class, and the two went on to start GoPuff a year later.

Gopuff is an American consumer goods and food delivery company that immediately delivers customers’ everyday needs, including cleaning & home products, food & drinks, groceries, alcohol, and even over-the-counter medications. The company was founded in 2013 by two Drexel University students, Yakir Gola and Rafael Ilishayev, who first met each other in their Business 101 class. And from there, the two went on to start Gopuff a year later.

The headquartered of GoPuff is in Philadelphia, Pennsylvania. Initially, the owners (Yakir Gola and Rafael Ilishayev) made the first several thousand deliveries, and now Gopuff is one of the fastest-growing tech companies in the U.S., with operations in 650+ cities through approximately 500 micro-fulfillment centers. Recently, it also acquired BevMo! Stores to fulfill orders of over 12000 everyday essentials to customers in 30 minutes. Gopuff is so successful that the company’s co-owners were named to Forbes magazine’s 2017 list of the 30 Under 30 in the retail and commerce category. And in both 2020 and 2021, GoPuff was named to the list of CNBC’s Disruptor 50.

Interesting story of Origin of Gopuff

Yakir Gola would never have founded goPuff if he didn’t own a car. As he was the only one of his friends with a car, so he used to drive late at night to a convenience store for his friends, to get ice creams, food, and snacks. Eventually, Gola got frustrated with doing it himself every time and, at last, came up with the idea to start a company that could bring the convenience store to the customer’s doorstep at a minute’s notice. And finally, in 2013, he and his fellow students at Drexel University Rafael Illishayev founded GoPuff.

Gopuff operates in 1000+ cities throughout the United States and European Union with over 600 outlets, delivering over 12,000 products 24/7 directly to people’s doorsteps with an innovative driver-partner and facilities network. And to be a smooth-functioning firm, Gopuff has over 4,000 working employees today. So, based on products, services, and the number of working employees, the company’s valuation is estimated to be well over $10 billion as of 2022, and the net worth of Yakir Gola, the co-founder of Gopuff, must be considerable.

Since its initial investment round in 2015, the company has continued to attract funding from significant investors. According to sources, Gopuff got approximately $3.4 billion in funding.

Yakir Gola’s entrepreneurial spirit and vision in founding GoPuff alongside Rafael Illishayev are primarily responsible for his accumulated wealth. The Net worth of Yakir Gola is estimated to be $10 million.

His start-up brings smiles to millions of people throughout the United States of America and Europe. The company and his work ethics help him to earn a reputation and recognition. In 2017, Yakir was listed in Forbes as one of the wealthiest people in the Retail and E-commerce sector. He secured the 30th position under 30. More so, Yakir Gola also received the Marketer of the Year from Target that same year.

Yakir is a first-generation American who grew up in an entrepreneurial family. His parents are from Israel and moved to the USA 40 years ago. When Yakir was 7 years old, since then he started helping his father run the family’s small jewelry business in Philadelphia which gave him the kind of business experience that proved helpful when it came time to start his own business.

In 2012, Yakir attended Drexel University for a Bachelor’s degree in Business Administration, Finance, and Legal Studies course where he met Rafael Ilishayev in their first Business 101 class and that’s when they came up with the idea to start a company that would have revolutionary business Model. A year later in 2013, they together founded Gopuff from their dorm rooms.

Other essential details about Yakir’s family and personal life, such as his spouse, children, etc., is not in the public domain yet. As soon as these details are public, we will bring themto our page about Yakir Gola.

Who is GoPuff owned by?

GoPuffis founded by Rafael Ilishayev and Yakir Gola. As a result of its network of couriers carrying food and convenience products, including chips, Tylenol, and laundry detergent, a delivery firm GoPuff emerged as one of the winners of the pandemic shutdowns, attaining a value of $15 billion.

Why is it called GoPuff?

Initially, GoPuff was an on-demand hookah delivery service but expanded to delivering food and goods commonly found at convenience stores. Though they sell no tobacco products now, the company’s name evokes the Middle Eastern hookah pipe because, as Yasir Gola, the co-founder, says, they just wanted their name to create some curiosity.

Why is Gopuff closed?

GoPuff is still open, and reports say that the yearly estimated revenue for GoPuff is roughly between $4 and $5 billion and has yet to show any signs of deceleration. So, GoPuff has announced only layoffs and warehouse closures due to economic concerns.

How is Gopuff making money?

Each user’s Fam subscription earns money for GoPuff. The company charges some value from its clients by giving free delivery of products, double points on every order, and other incentives that are only available to its Fam members.

No, Gopuff’s deal with Uber is not a straight-up acquisition but a partnership that will give an Uber Eats user automatic access to GoPuff. Additionally, on all Gopuff orders above $15, Uber Pass and Eats Pass members will be exempt from the delivery fee. The Gopuff and Uber partnership was scheduled to launch in 95 U.S. cities in June.

Where does Gopuff get their food from?

Delivery drivers do not shop at gas stations or grocery stores to pick up goods or foods for the customer. They pick them up from Gopuff’s warehouse, which makes delivery much quicker than it would be through other services.

Yes, GoPuff is still active. However, in July 2022, GoPuff announced the closure of 76 warehouses in the US and layoffs impacting about 1,500 employees. The company still has plans to increase its services at additional productive sites. The company fired 250 workers in more layoffs in October 2022.

Ans- The marriage date of Yakir Gola is yet to be in the public domain. Once we are able to find the Yakir Wedding date, we will disclose it here.

Ans- You can connect with Yakir by following this Instagram handle.

Q. How Old is Yakir Gola?

Ans- He never mentioned his date of Birth in any public interview. Therefore, it is hard to know his date of Birth. However, as per his graduation year and Gopuff’s founding date, it could be assumed that he must have crossed 33 years.

Q. What is Yakir Gola Ethnicity?