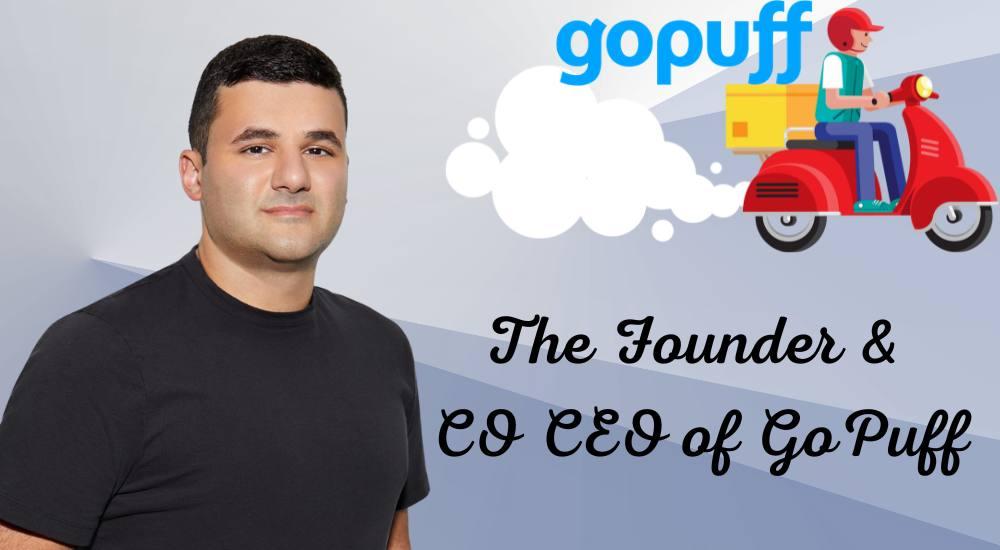 Today we have come up with another blog related to Rafael Ilishayev, the GoPuff founder & Co-CEO. His story might strike you to make your dream a reality. The blog will be all about Rafael Ilishayev, from his arduous efforts to skipping classes for the deliveries.

I will also tell you about other facets of Rafael Ilishayev, an entrepreneur with many creative and innovative ideas. You will come to know how he started his business during his graduation and turned it to be one of the largest companies in the United States of America. If you are interested in knowing about Rafael Ilishayev, his net worth, etc., keep reading the blog.

What is Rafael Ilishayev Known For?

Rafael Ilishayev is the co-Founder & Co-Chief Executive Officer of GoPuff, one of the largest generational companies in the United States of America. It is a platform that helps users to get everything instantly at the door. Essentially, it is a platform for consumers’ immediate everyday needs like delivering drinks (including alcohol in select markets), over-the-counter medicines, snacks, and more.

This generational start-up company has reached several milestones now. In the beginning, Rafael was struggling for finance and support for the company, but now the founder has everything to scale up and drive it somewhere else. With hard work and perseverance, Rafael has made it to this position.

When did Rafael Ilishayev Create Gopuff?

The story behind creating this innovative start-up is quite interesting. Mr Rafael once said that when he was in graduation, he met with Yakir Gola, another prominent figure in the entrepreneur domain. He mentioned that Yakir was the only friend in their group who had a car, and when they need like cold drinks and snacks, they made these available with the help of Yakir Gola.

Encountering the difficulties of having snacks and colds, they got the idea to start offering service of essential goods to the students. Like the Facebook founder who started his company from a dorm, Rafael also created his company from the dorm room and started delivering essential goods to students because it was the problem of several students in the college. The two best friends stepped proactively and established this on-demand delivery services platform. Factually correct, it was created in 2013 after considering the problem of all college students.

What is GoPuff Used For?

The Gopuff has become the top-most on-delivery service platform in the United States of America & also around the globe. Until now, the platform has been covering several cities and towns worldwide. It is fulfilling the needs of the consumers by delivering the services to the door.

For the uninitiated, Gopuff is a platform that consumers turn to for their immediate daily requirements. GoPuff delivers thousands of essential goods in & around 30 minutes for a fixed $1.95 delivery fee. Talking about the same, Gopuff promptly processes client requests for everything from food and beverages to over-the-counter medications to cleaning supplies and alcohol in different regions in the USA.

This is a by-product of the generational entrepreneur Rafael’s creative and innovative mind. Consumers around different cities are pretty satisfied with the services of the platform. Even Rafael once said in an interview that delivering satisfactory services is the absolute motto of the company. For the unversed, Gopuff is delivering thousands of items in around 30 minutes, reaching more than 1,000 cities worldwide with more than 600 outlets and over 12,000 products. It is an excellent achievement for Rafael Ilishayev.

Rafael Ilishayev & His Contribution to GoPuff

Like Yakir Gola’s family was an immigrant, Rafael Ilishayev’s family also immigrated to the USA. They settled here and made their fortune. Talking about Rafael is a first-generation American who grew up with an entrepreneurial family in the New York metro area.

Before he came to the idea of creating this platform, he met with Yakir Gola, an innovative entrepreneur. Rafael met Yakir Gola in their first Business 101 class at Drexel University. They became a best friend from there. Later, both came up with the idea of GoPuff and went on to start Gopuff the following year.

Since the company’s earlier days, both had made thousands of deliveries and established it. Several things had been compromised by Yakir and Rafael for this present big and fastest delivery platform. Interestingly, they even bunked their classes to complete the delivery order on time.

They have built this fastest delivery start-up with great effort and perseverance. Along with changes and availing of the opportunities, they’ve expanded Gopuff into a fast-growing tech company with 7,000 employees across the nation, creating the instant needs category.

The platform continuously achieves a more significant milestone with proper strategy and arduous efforts. Though the company has operations in several cities in the United States of America, they have recently acquired BevMo Stores to satisfy consumers’ demand. Factually, Gopuff is operated in more than 650 U.S. cities and leverages its network of over 250 micro-fulfillment centers.

Moreover, they are distributing pizza and freshly prepared foods from their Gopuff kitchens under a new brand name, Mean Tomato. Consequently, it was genuinely expanded beyond the initial use case. But, the company’s founder is also intensely concentrated on these local customers.

The company’s absolute motto is to fulfill consumers’ needs. Keeping in mind the essential requirements of the consumers, GoPuff manifests the right direction under the leadership of generational entrepreneurial Rafael Ilishayev. With the combined efforts of Yakir and Rafael, they have achieved a great goal.

For the unversed, Rafael and Yakir were included on Forbes’ 30 Under 30 list in the category of Retail & Ecommerce in 2017. Moreover, Rafael was also given the Drexel University Founders Award in 2019. Along with these significant milestones, Rafael Ilishayev was also made to include on CNBC’s Disruptor 50 in 2020. Through the Charles D. Close School of Entrepreneurship and Chabad Serving Drexel University, Rafael maintains close ties to his alma mater, Drexel University.

Aizik and Nelly Ilishayev, both 65, have recently visited Marlboro from Moscow. The couple, who are Sephardi Jews initially from Azerbaijan but have spent more than 20 years living in Moscow, and have many relatives spread all across central New Jersey.

A few among them include their daughter Yaffa, son-in-law Rufat Yusupov, and Rafael Ilishayev, a graduate of Philadelphia’s Drexel University and the founder of GoPuff.

The name of his father & mother is not known to us. But, if we find their details, we will promptly disclose them here. Ilishayev speaks other languages besides English, as stated on his LinkedIn profile. His family is of Russian descent, and it’s better than our guess as to how adept he is in that language.

Rafael seems a private person who rarely speaks about his family, wife & children on social media. Indeed, he is a top chief Executive officer in the United States of America.

Interestingly, his company, GoPuff, has more followers than him. The company has an Instagram account with at least 209k followers. Rafael may not be well-known to everyone, but his company is unquestionably the fastest delivery platform and the most popular. His company is better known than he is.

Rafael Ilishayev does also have a Twitter account with fewer followers and tweets. He has until now made 422 tweets on his Twitter handle account. Unquestionably, he is a person who rarely engages on social media & other handles.

What is Rafael Ilishayev Net Worth?

The complete figure of his net worth has yet to be discovered by us. However, he has now amassed millions of dollars. Rafael Ilishayev, the creator of goPuff, has presided over a $3.9 billion business. His company has dominated the market for speedy food delivery. GoPuff promises to bring what you want when you need it most.

You can get anything from substantial goods to medicine to laundry goods. More so, if your stomach is craving ice cream at one in the morning, beer at eleven at night, or some healthy seaweed chips at four, just place your order, and you will get it in around 30 minutes.

Q. Who is GoPuff owned by?

Ans- The on-demand delivery platform, GoPuff, is owned by the top most recognized CEO, Rafael Ilishayev.

Q. Where was GoPuff founded?

Ans- The idea of delivery service came when Rafael was at Drexel University. He and Yakir Gola created GoPuff when they met at this University and encountered the common problem of students having snacks and cold. They started it from a dorm room and even made thousands of deliveries by themselves. It was founded in 2013.

Q. Where is Rafael Ilishayev from?

Ans- Rafael Ilishayev is of Russian descent. However, he was brought up and grew up with an entrepreneurial family in the New York City metro area.

Q. How old are the Gopuff founders?

Q. Why did they call it Gopuff?